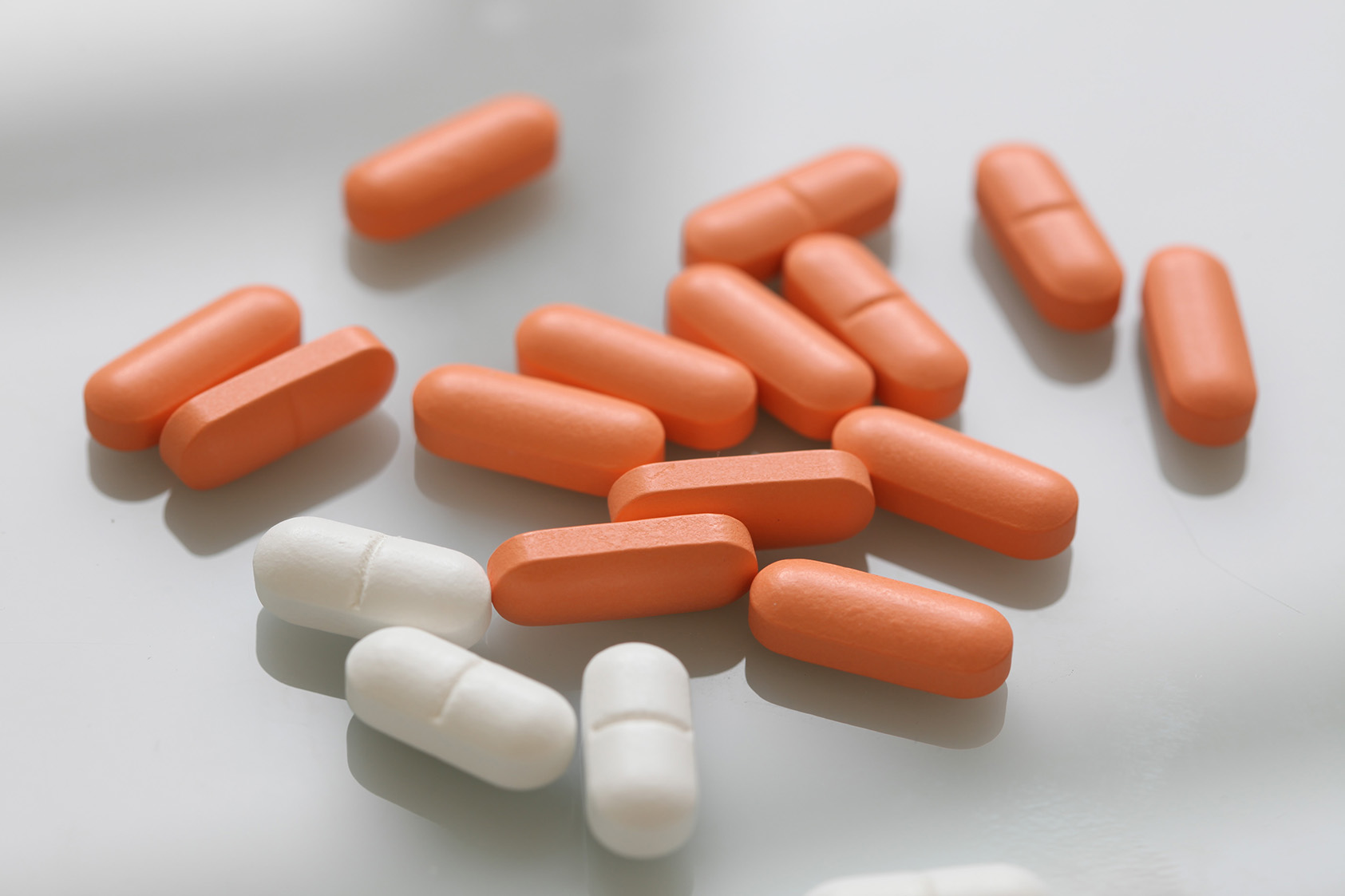 “Coating” means any kind of covering of a substrate. Coating can refer to the process of coating, as well as to the coating material. The film coating of tablets or capsules is an important process step, which actually originated in the pharmaceutical manufacturing process. Film coating processes have always played a prominent role in the field of dietary supplements and the demand is continuously rising.

The reasons for coating can be quite diverse. First there may be reasons of technical application, as e.g. to make the product easier to swallow, or to improve the mouth feeling, in other words to mask taste and smell. Another reason for film coating is to make the product more stable especially if the product contains active ingredients, which are sensible to humidity, oxygen, or light. This is to prevent chemical reactions of the active ingredients, which could affect the properties of these ingredients. Delayed release by entericcoated film coating is another possibility. Colored coating helps a user to distinguish various products or dosages, but quite often it is also applied for appearance. It promotes a positive feeling and recognition value for a medication or dietary supplement by brand recognition. This applies specifically to colored and flavored film coatings, which, in turn support the branding of the product. Film coated tablets are also more resistant to mechanical influences than the uncoated tablets [1]. The end consumer recognizes the product as a premium product, associating it with consistent high quality. Another advantage is a certain protection against product counterfeiting by the additional film coating [2], since complex coating technology requires extensive technical know-how. In case of soft capsules an enteric coating (description see below) can completely eliminate the “burping” phenomenon, which can be a side effect for people with sensitive stomach. So this promotes long-term loyalty by the end customer.

The dragee is most likely the oldest coated form of medication. Its name is derived from the French word “dragée” (= small sweets). The coating with several layers of sugar was often used to conceal the quite bitter taste of some pharmaceutical ingredients. Classical sugar coating uses five production steps (sealing, subcoating, color coating, smoothing, polishing) this process is used in a shorter and slightly modified version, which uses three steps instead (spraying, mixing, drying). Sugar coating requires long processing times of up to two days, since many individual layers of sugar must be applied in order to provide a stable overall cover. So it is quite time consuming as well as material consuming, and therefore sugar coating is more and more replaced by film coating with polymeric structure [3, 4].

In case of film coating, the coats are fairly thin in contrast to the thick sugar coating, so the increased weight of the actual tablet core is negligible (just a quick comparison: coat thickness of a sugar-coated tablet is 0.2 to 0.5 mm, and a film coated tablet is 10 to 100 μm) [5]. Further advantages are the short processing times (typically 75 to 120 minutes) and the high process efficiency favoring film coating in comparison to the sugar coating. “Ready-to-use” film coating systems allow for shorter total processing times even in the production of coating solutions [6]. 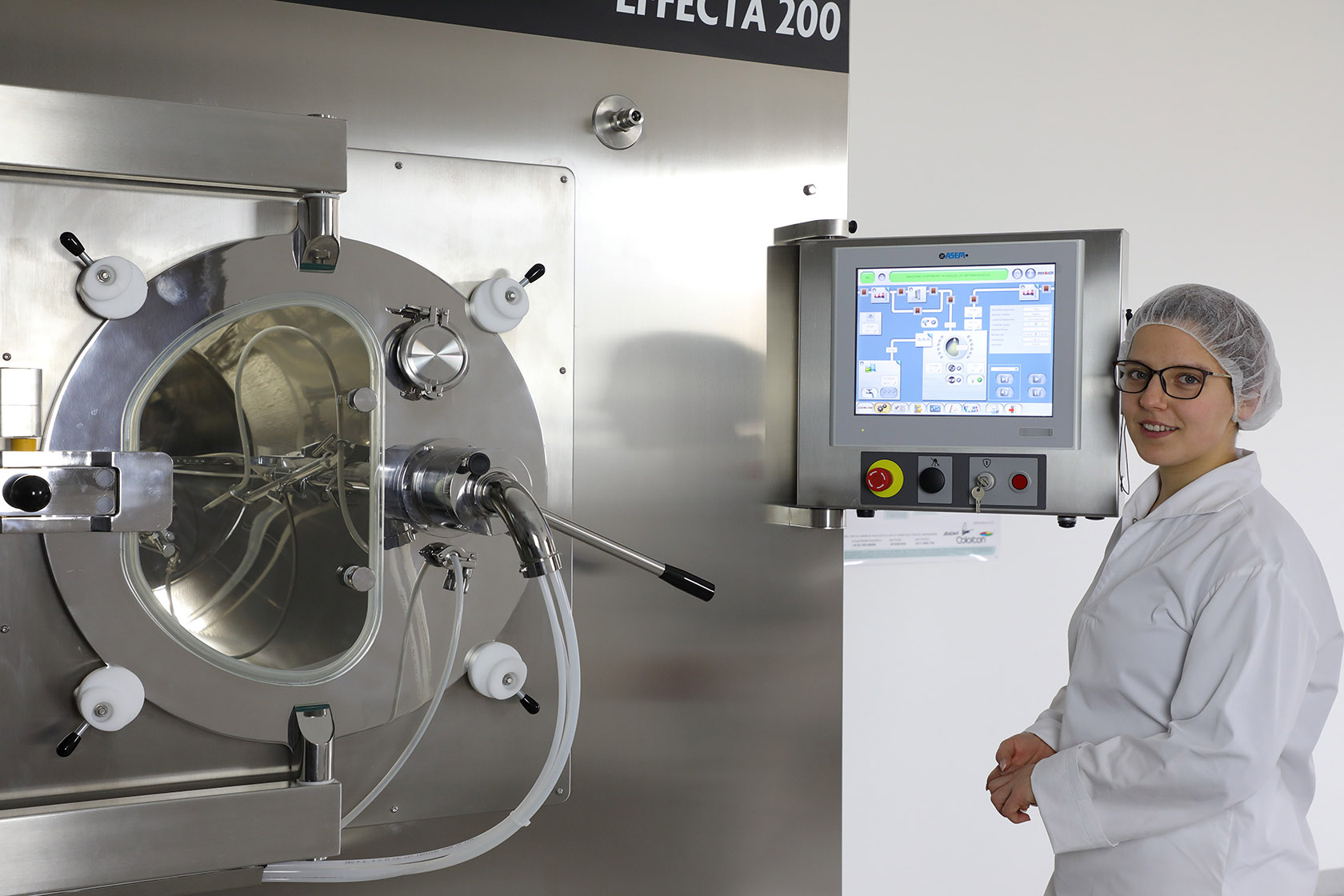 The History of Coating and Film Formers

The state-of-the-art coating process, which uses semi-synthetic or fullysynthetic polymers as a film former on pharmaceutical products, originated in the 1950s, although the first time medication had been coated with plant seed slime dates back more than 1000 years and was used by the physician Rhazes in Bagdad (850 – 923 n. Chr.) [7]. The use of polymers mainly with alcoholic solutions – which was still common practice decades ago – has been largely repressed due to the involved risks, e.g. explosion hazard due to their volatile nature. Today polymers are often processed in aqueous dispersion, aqueous slurry, or aqueous solution. Examples for water soluble film formers, which are approved for the food industry and thus also for dietary supplements, are hydroxypropyl methyl cellulose (HPMC), methyl cellulose (MC), and polyvinyl alcohol (PVA) among others, however, natural agents, such as shellac, are also frequently used for dietary supplements [8]. Some polymers have the advantage to remain stable even in a low pH-environment (compare to gastric acid, which has a pH value of 2 – 4) and only dissolve in a pH neutral environment (= resistance to gastric juice, example: shellac). Additives such as talcum help to prevent tearing of the film during film coating. Wetting agents as e.g. polyethylene glycol (PEG) are added to improve the elasticity of the film [2].

Coloring the coated substrate serves not only aesthetic purposes, but also allows easier identification. Synthetic colorants, such as azo dyes, become less and less popular among consumers and manufacturers and/or they are partly no longer approved for use in dietary supplements. Natural colorants, as for example carmine, riboflavin (yellow) or spirulina (green), may even enhance the product features [2], and due to their natural origin they are widely accepted by consumers. A slight disadvantage of natural colorants, however, is their varying color and sensitivity. They may fade faster and change color along with temperature changes.

Requirements on the Substrate to be Film Coated

Prior to the actual film coating process the dust remainders must be removed from the tablets and oil residue from the soft capsules. Requirements on the tablet core include low porosity, minor friability, i.e. abrasion resistance of the tablet with respect to mechanical strain (preferably < 0.1 % of the tablet core weight) and a tablet hardness of 80 Newton. A single tablet that is too soft and crumbles in the coating device, may result in a completely ruined batch [3]. Along those lines, the soft capsules must be a sturdy and suitable base material, which means they must have a pressure resistant shell. Furthermore, the soft capsules must have tight seams, since a leaking oily substance will affect the coating process quite negatively. The suitability of soft capsules for film coating can also be determined by the quantity of the – usually wanted – surface oil; in other words they may need further treatment (removal of surface oil). Therefore we recommend close inspection of the soft capsules prior to their release for coating. Coating of hard capsules is possible, however, absolutely tight capsule closing without banding, prior to the coating process, can hardly be realized. 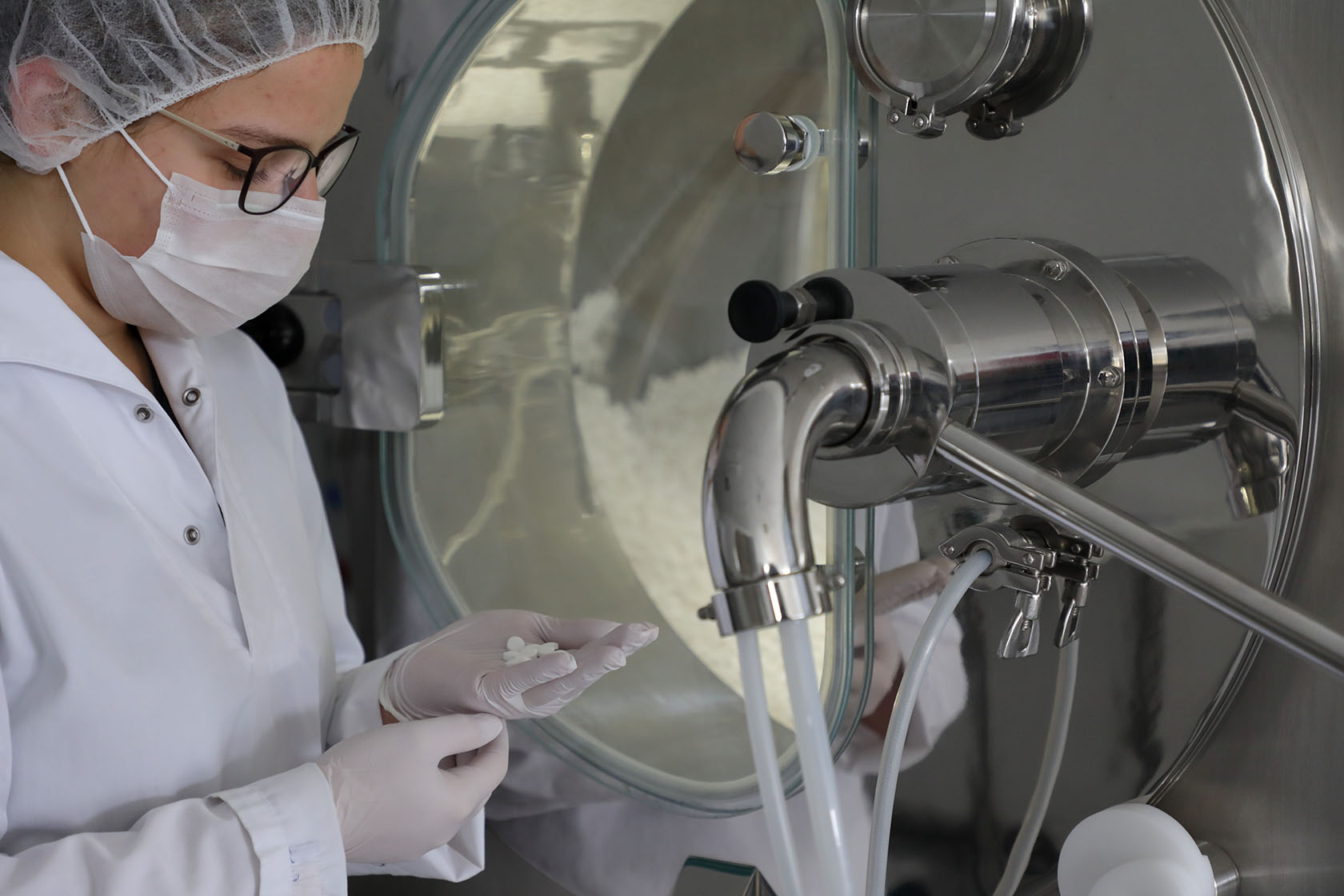 Basically we differentiate between two types of coating: While particulate material (e.g. mini-tablets, pellets) are easier to be coated in a fluidized bed process [9], bigger tablet cores and capsules should be coated in a drum coater. In the slow-rotating, perforated drum the mechanical strain is subtle and controllable. Parameters, which may influence the coating process as well as the quality of the film coat, are the spray rate of the spray nozzles and the spray cone, spray pressure, drum speed and its loading on the one hand, and regulation of air intake and exhaust, as well as air temperature in the machine, on the other hand [10, 11]. In spite of a high degree of automation, during the film coating process well trained and skilled workers are still a must. Continuous in-process inspections, mainly by optical evaluation provide for high product quality. Production of coated particles in fluidized bed technology is a costly process, so the food industry rarely makes use of this technology. Likewise, the constantly changing product formulations present an additional challenge for the development of new coatings and coating materials [12].

Inspection of the film tablets after the coating process depends on the function of the coating. The disintegration test is mandatory. Whether it is a film coat, which must not affect the release of the active ingredient (here the disintegration time in 0.1 mol/l hydrochloric acid is 30 minutes maximum), or the resistance to gastric juices, which must be verified (disintegration time with enteric coating: no disintegration within 2 hours in 0.1 mol/l hydrochloric acid, after replacement of hydrochloric acid with a phosphate buffer solution pH 6.8 the substance should be released within 30 minutes). The storage stability of film coated products can be tested in an accelerated stress test, e.g. at 40°C and a relative humidity of 75 %, or in a longterm test at 20°C and a relative humidity of 60 %. The most important influencing factors must be known by the time of the development phase where smallscale batches (2 kg to 3 kg) are being film coated. An unknown fact, however, is which influence the large quantities of tablet cores or capsules have on themselves and their processing [3]. Therefore the rule is: The higher the process stability in the test stage the easier the scale-up to large-scale processing (e.g. 100 kg to 180 kg).

Regulatory aspects must not be neglected. Each country has its own regulations regarding the use of colorants and dyes which must be considered. Quite often the countries follow the regulations for use of dyes valid in Europe, Japan, or USA. However, it is not just a question of dyes. Japan has quantitative limitations for the use of various additives (e.g. HPMC, corn starch), which are used in film coating [2]. If the dyes in question are permitted in certain areas, the products may be classified as medication in some countries, and as dietary supplement in other countries. Hence they are subject to different requirements. The regulatory aspects may change frequently, therefore they should always be checked first to see if they still apply and are up to date.

The definition of suitable processes and coating materials requires extensive practical know-how and a sure instinct. Not for nothing do we call it the “art of sugar-coating” [3], which likewise applies to the complex coating process. Technical laboratories allow for the development of suitable processes and optimum process conditions, and the modification of known film formers increase the selection range continuously. So the future will bring a constantly growing variety of film coating materials, which will also be available for dietary supplements.

Christina Spötzl
is the Project Development Manager at the Goerlich Pharma GmbH. After her vocational training for lab technician in the dairy industry she continued with E-leaning courses at the College Riedlingen and graduated as Bachelor in “Food Management and Technology” concentrating on nutritional aspects. At the same time she worked for six years in the pharmaceutical industry. 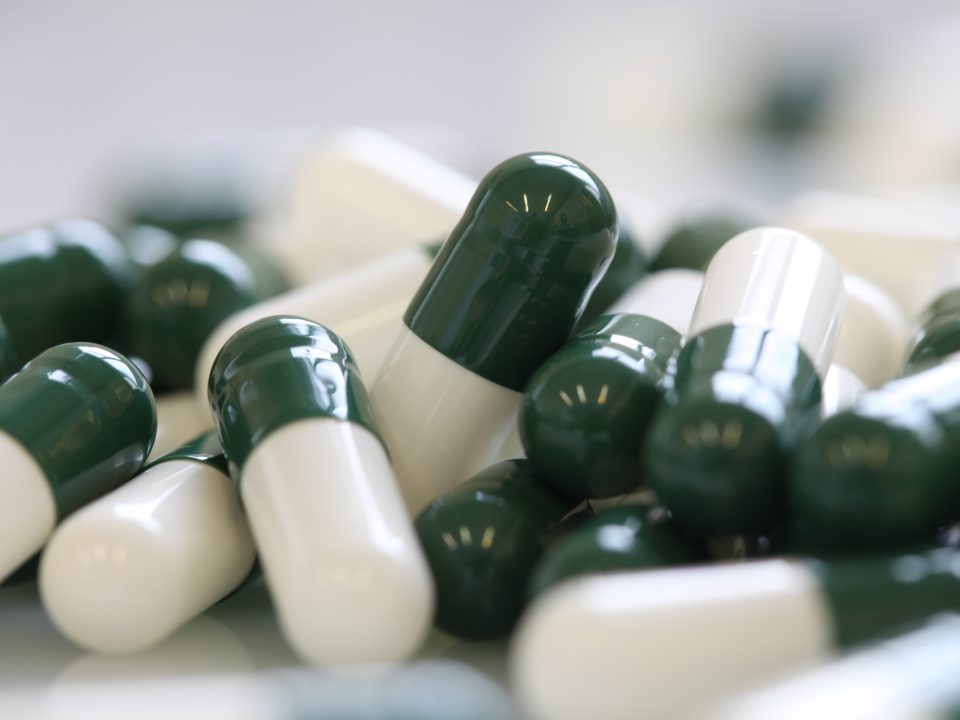 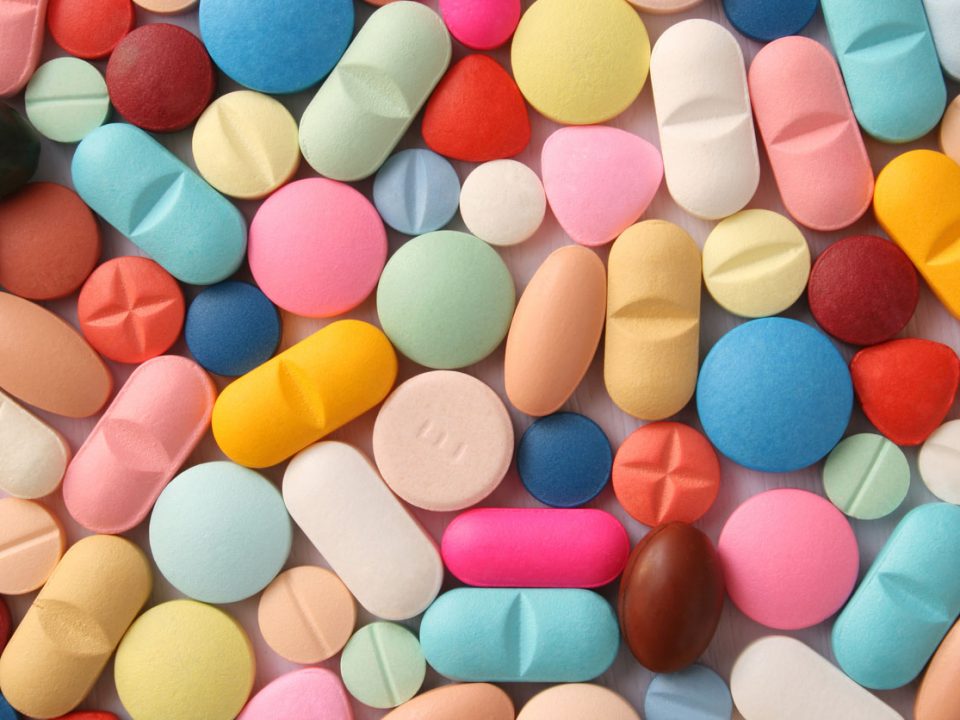